Cooramin Sporthorses is a small stud located in Wagga Wagga, NSW, halfway between Sydney and Melbourne and easily accessible by plane as well as road or rail. We use carefully selected bloodlines, aiming to produce international quality dressage horses.

Cooramin is run by Heather Ip (formerly Heather Clegg), with fantastic help and support from mum Jane, husband Jason and kids Christopher and Georgia. Heather has a solid scientific background on the breeding and raising of young stock, with a Bachelor of Applied Science (Equine Studies) and a Master of Science in Veterinary Science and a long career teaching equine reproduction and stud management at Charles Sturt University.

Heather has been breeding warmbloods and arabian derivatives since 1994 and has an eye for matching mares and stallions to produce outstanding types. Being an FEI dressage rider herself, Heather also has a good understanding of the qualities a successful dressage horse requires. 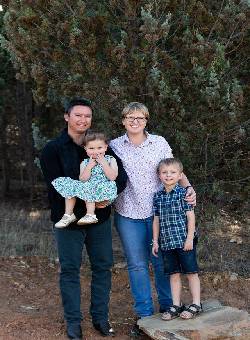 Our priorities at Cooramin are rideability, trainability, conformation for soundness and type along with movement and ability for the FEI levels. We aim to see the Cooramin horses out competing and winning at all levels but, most importantly, allowing riders to achieve their dreams to ride FEI dressage. 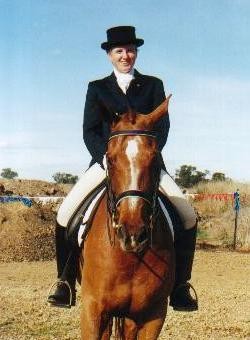 Heather riding Aloha Titan, an anglo gelding that Heather produced from a young show hack to a successful FEI dressage horse. Heather understands that it takes a special horse to reach the FEI levels and strives to produce these horses at Cooramin.

In 2006, Heather and her mum Jane purchased a 40-acre block of land on Harris Rd (formerly Cooramin St) in Wagga Wagga. This block was christened "Cooramin" and became the home of Cooramin Sporthorses.

Cooramin is an Aboriginal word for a water carrier made of bark. As there was no water to the block of land when it was purchased, Heather, Jane and Jason spent many many weekends carting water for the horses and to keep 1000 baby trees alive through the drought. We thought "Cooramin" was, therefore, a very appropriate name!

This original Cooramin property underwent a transformation, from an oat crop to a fully functioning horse property. However rapidly encroaching residential development made it increasingly difficult to run the stud from this location and so a much larger 500-acre property was purchased a little further down the road at Euberta, still with easy access to Wagga Wagga and Charles Sturt University.

The new property is an enormous project, initially covered in weeds of every kind and with no infrastructure except a falling-down house and sheep fences in a terrible state of disrepair. We are in the process of transforming this farm into the new Cooramin property – keep an eye on the News page for updates on its development.